After Effects scripts are coded tools to automate processes that would be too tedious to do manually, such as bulk renaming layers, shifting certain shape layers, importing text from a spreadsheet file, or organizing your project structure. In essence, scripts can do the manual tasks you can do, except faster. It cannot do things you cannot do yourself, (plugins, which are basically individual software within After Effects, can do this). In this article, I will point you to all the resources you’ll need to get started with scripting for Adobe products, specifically After Effects.

Update: A lot of developers have been linking to this article, so I’ve taken the liberty to update it frequently when new resources are available. 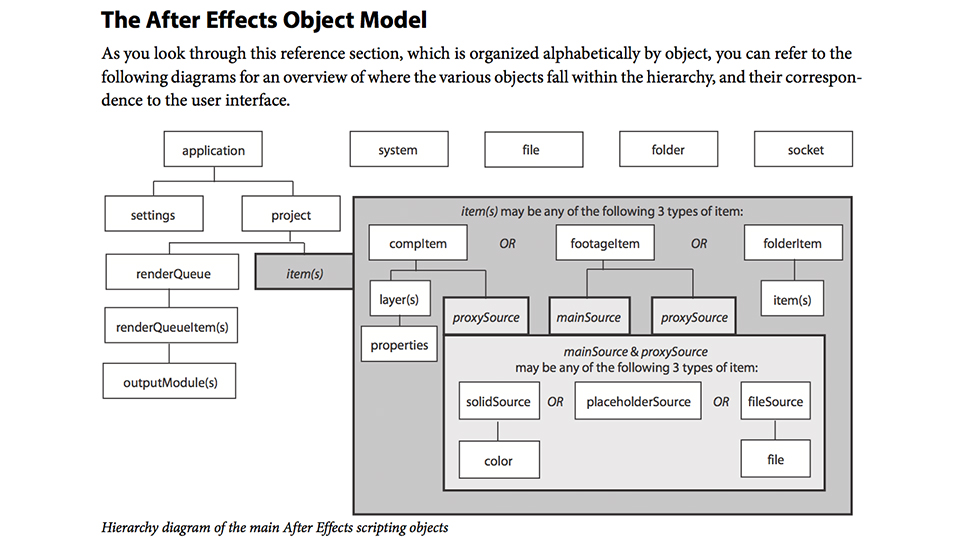 First off, there aren’t that many resources out there that take you from the beginning to the end of AE scripting. Most of the information on scripting are scattered throughout many sites, threads, and people. Luckily for us, there are three full-blown courses that actually take you through the steps of learning AE scripting: After Effects ExtendScript Training (free) by David Torno, Introduction to After Effects Scripting (paid via fxphd) by Lloyd Alvarez, and Scripting with After Effects (paid via fxphd) by Mathias Möhl.

Start off with David’s course, as it’s free and will cover the basics of Javascript and script development from beginning to end. Once you’ve gone through David’s basic course, subscribe to fxphd to access either Lloyd’s course (which is a little older), or Mathias’ course: both will focus on project-based development where you’ll build full functional scripts.

You’ll need the official After Effects Scripting Guide, which will give you most of properties, methods, and information you’ll need to script for AE. You’ll also find Peter Kahrel’s ScriptUI for Dummies very useful for building the user interface of your scripts. Lastly, I did an introduction to AE scripting presentation for Adobe, where I give a crash course on scripting and provide pretty useful reference code for the UI.

The rest of the information you’re going to find is through scavenging forum threads such as CreativeCow and Adobe’s AE scripting forum. Jeff Almasol’s redefinery site has a great collection of AE scripting basics and example scripts as well. Jeff also compiled a nice chart of AE matchnames that you will reference to frequently when writing your scripts to apply properties. Another great forum dedicated to scripting is AEnhancers, they have a lot of very skilled developers there to help you. Lastly, the famous Dan Ebberts’ MotionScript is a great place to pick up some scripting and expression basics.

I started scripting without having any knowledge of programming, so the learning curve was pretty steep. If you’re familiar with programming at all, even if you’ve taken a single intro course in school, you should be more than sufficient. Adobe apps use a language called ExtendScript, which is just a modified version of JavaScript, so if you’re into web development, you should feel right at home. The process is not that vigorous once you have the fundamental programming concepts down, like arrays, objects, functions, recursions, etc. Best of luck on your scripting adventures.

8 thoughts on “Learn How to Write After Effects Scripts”