FXhome recently announced their newest product, HitFilm Plugins, which brings the power and tools of HitFilm into other NLE applications such as After Effects, Premiere, Final Cut Pro X, and Vegas Pro. I had the opportunity to test drive this thing, and today I will talk about the pros, the cons, and everything else you need to know about the HitFilm Plugins before purchasing. To familiarize yourself with HitFilm and its workflow and effects, check out my HitFilm 2 review.

First, let’s take a look at the features:

The HitFilm Plugins are a separate product from HitFilm and will run you $499, but a cheaper upgrade option will be available for those who already own HitFilm. . You can view more information and buy the HitFilm plugins here. 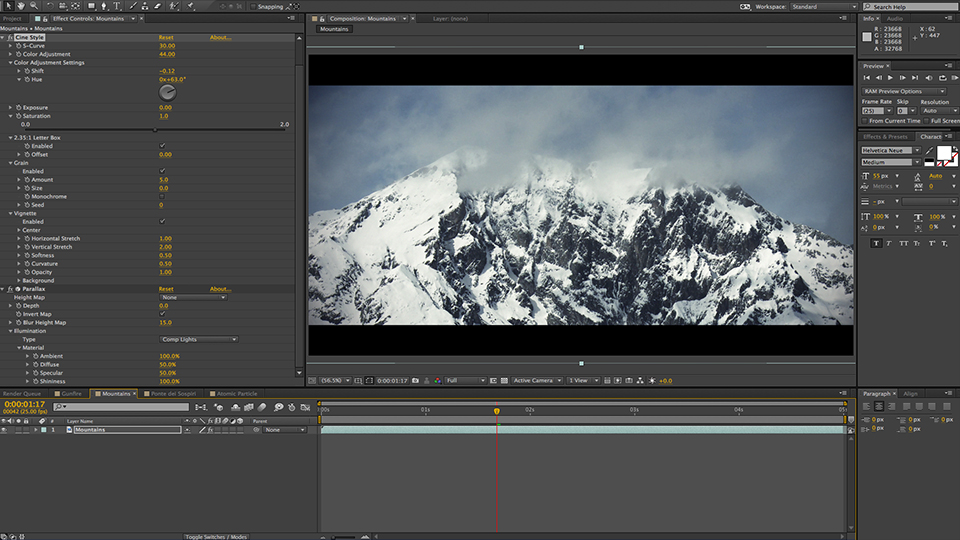 Not Really for After Effects

Let me be blunt as most members of my community are After Effects users: These set of plugins aren’t really geared towards After Effects. This isn’t a bad thing, but I will explain more about this later.

The majority of the plugins you’ll find in the HitFilm Plugins are effects that can easily be created and done using After Effects’ built-in tools with about the same amount of ease. Things like adding grain, changing color temperature, adding glows, lens blurs, and keying can be done with a single effect using AE’s native tools. The rest of the plugins are effects that are what I call “fun effects,” such as film damage, fish eye distortion, etc. The reason why there is so much redundancy is because these are the same plugins found in HitFilm, which attempt to give you compositing features (similar to AE) in their standalone application. It makes sense to have these effects in HitFilm, but becomes redundant once you bring them over to AE because they are both kind of the same type of application: compositing and motion graphics.

There are a few exceptional effects that I want to point out, especially the Gunfire, Parallax, and Cinestyle effects. I talk more about these plugins in the demo video above, but these are some unique effects that After Effects could really benefit from depending on your expertise. More on this later.

Overall, the HitFilm plugins tend to simplify effects, which is evident in their names. It’s a fantastic way for beginners to experiment and figure what things do visually, rather than focusing on the complex terminology and technical aspects. Kind of like how Magic Bullet Mojo simplifies the “Hollywood” look, HitFilm plugins simplifies everything. This is great! But not in After Effects… 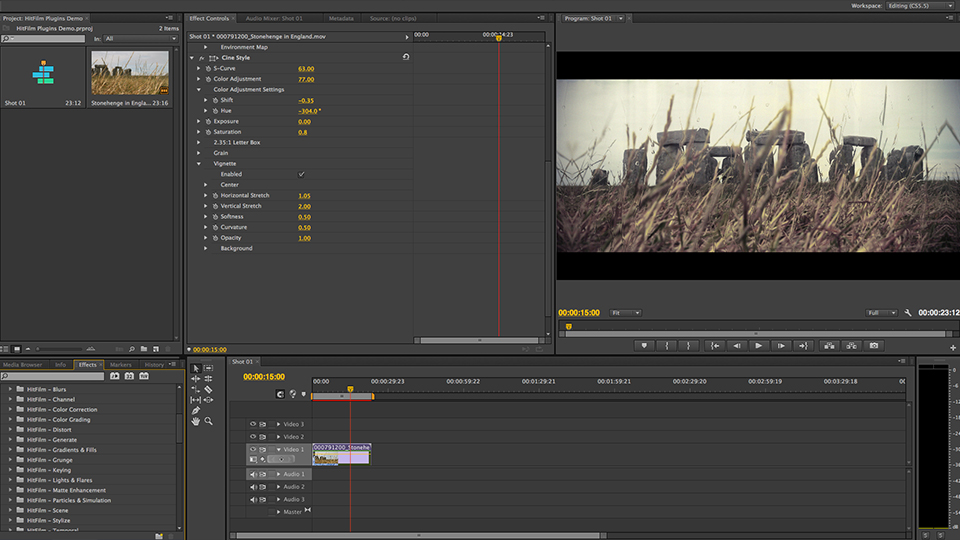 The HitFilm Plugins really shine when we bring them into editors such as Premiere, Vegas Pro, or Final Cut Pro X. Personally, I hate the built-in effects in these editors and tend to only use Red Giant plugins inside these hosts. Built-in effects are usually very basic and limited, but HitFilm Plugins changes all that here.

Not only can you easily add vignettes, letterboxing, and do grain removal through HitFilm Plugins, but you can finally do some decent compositing as well with the powerful controls of these plugins. For example, compositing a muzzle flash with complete control over individual components, sizes, and color right from your editor. Editors no longer need to rely on stock footage to achieve effects like light leaks, film damage, or muzzle flashes, these can all be done with HitFilm Plugins.

If you don’t own Knoll Light Factory, HitFilm Plugins gives you a decent Lens Flare kit to create and customize your own lens flares right in your editor. Cinestyle gives you that Mojo look without having to purchase Magic Bullet Mojo. With HitFilm Plugins, editors have a powerful and stable editing environment where they can add the finishing vfx touches without ever having  to leave their editor. Editors now have powerful compositing and generating tools that were once reserved for more complex applications, right in their arsenal. This is the true benefit of HitFilm Plugins.

With the addition of the HitFilm Plugins, your editor becomes a lot more like HitFilm. You have full control over your edits in your comfortable NLE platform, but have the power of HitFilm in your toolkit. I believe this is what FXhome had in mind: Cut with whatever you want, but use our effects to help you. Bringing these plugins to After Effects is more like the icing on top, but we don’t really need it.

The mere fact that you can do some cool visual effects completely in your editor is what makes these set of plugins special. With some tweaking, you can composite lightning, fire, rain, and much more without having to go into After Effects. If you’re not an experienced After Effects user and are only interested in editing, this is perfect for you! A lot of filmmakers don’t necessarily have an interest in learning vfx, they’d rather focus on the filming and editing to tell their stories, and these plugins make it easier for them.

These plugins are fast – think Red Giant Universe fast. I had no trouble playing these effects in almost realtime. In fact, they may even be faster than they are in HitFilm itself (could totally be speculating).

The workflow is a little messy, but that is of no surprise since they were originally designed for HitFilm. Some of the default values and max/min slider values need to be tweaked because you can easily overshoot when scrubbing values. This could change as I am using a beta version.

All the “3D” effects give you 3D control over their position and rotation, but lack 3D camera interaction. This may not be important for 3D muzzle flashes, but for effects such as Atomic Particles and Lens Flares, it is crucial that they can fully interact with 3D cameras, such as in After Effects (which is why I’m saying these plugins aren’t geared towards AE). The 3D plugins are essentially only 3D in their local spheres, and do not react with any other cameras. There is a workaround though, you can link the Transform properties of these effects to a 3D null object in AE, thus manipulating values that will make your effects react to 3D camera changes. This is obviously impractical.

Overall, this is a perfect plugins package for editors who want more effects and creative tools in their editor of choice. These plugins bring compositing to a whole new level, outside of a compositing application. The speed is fast, the effects are easy to use, and you get a ton of effects for your buck. These tools are also perfect for beginners who want to achieve a more polished and professional look, and these plugins make it extremely simple to do just that. The super fine control is not there, and some effects are redundant in After Effects, but overall, this is a nice package for any indie editor who wants to take their projects to the next level.