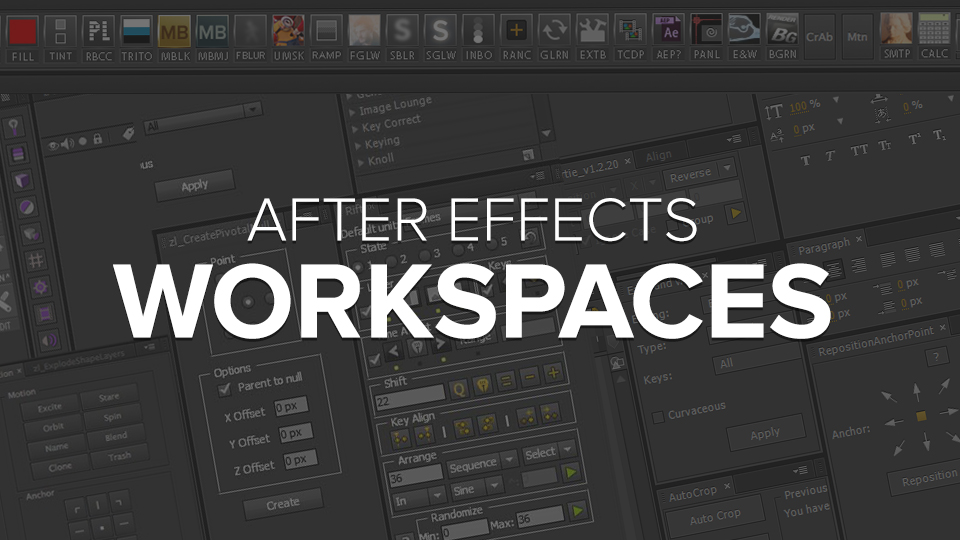 We often see people sharing their physical workspaces with intricate desk setups, fancy RAID systems, cool LEDs, and whatnot, but what about our digital workspaces? Zack Lovatt on Twitter thought it’d be fantastic to start a post where we could all share our After Effects workspaces and some details about them, so I decided to start one! 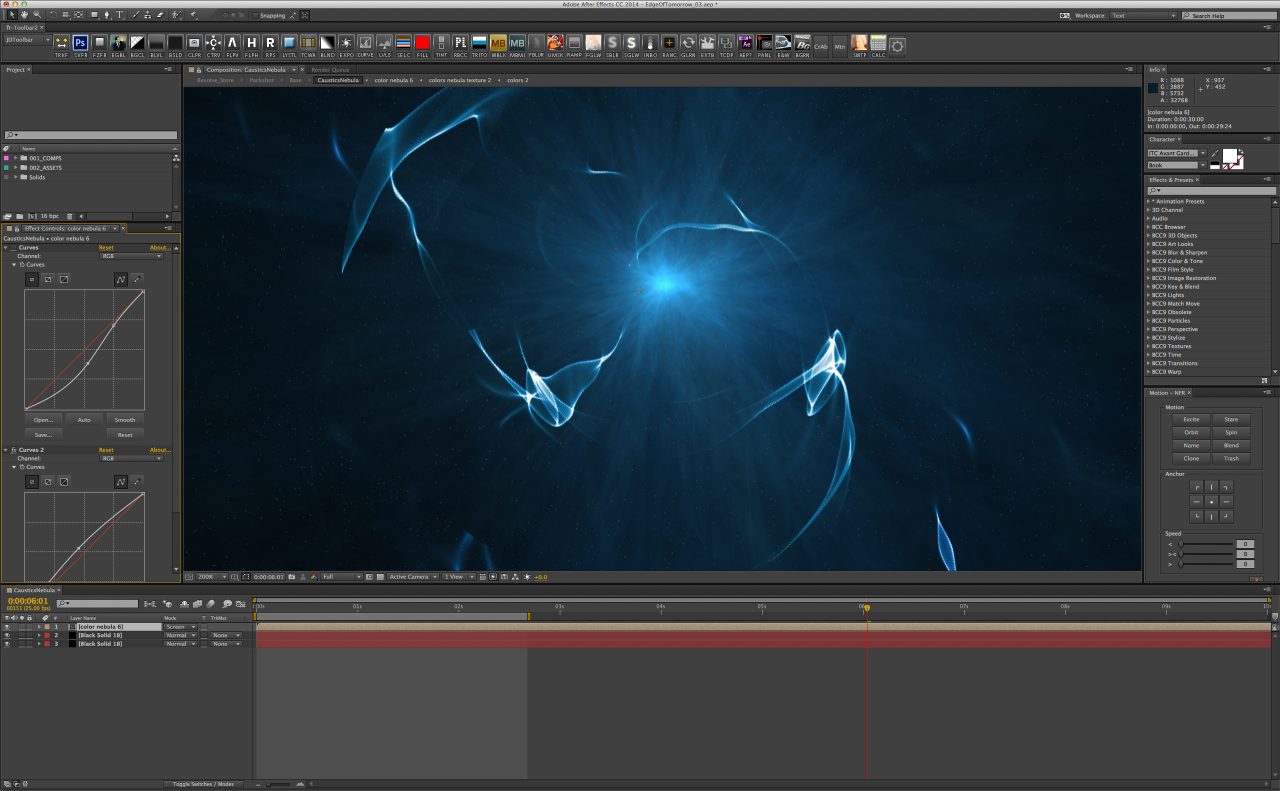 John Dickinson from Motionworks has a fairly basic workspace, he’s rocking the ever-so-popular ft-Toolbar script with the essentials, and also the Motion script by Mt. Mograph (who’s workspace is also featured below!) 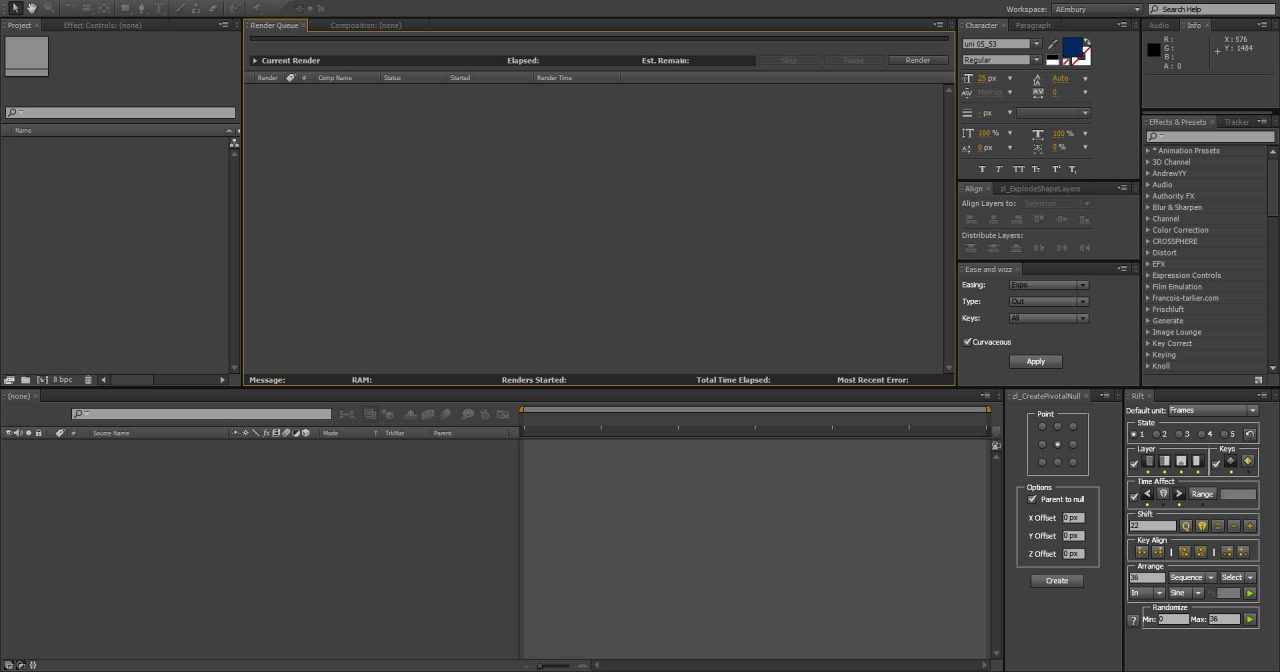 Andrew Embury‘s workspace is very minimal to allow for total focus on animation. He also says it’s simple so that when he transfers workstations, he’s not lost at another setup. Andrew also uses the Rift script to manage keyframes, and a few of Zack Lovatt’s own scripts such as Create Pivotal Null and Explode Shape Layers. 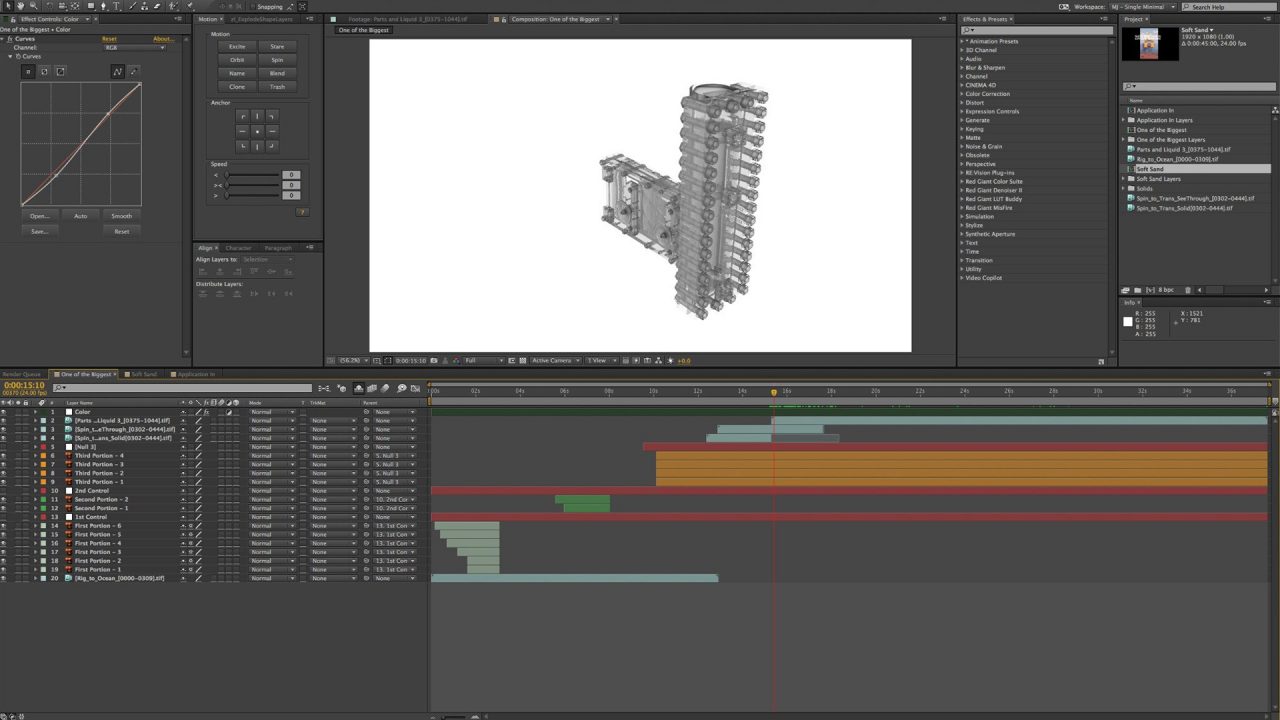 Matt Jylkka of Mt. Mograph has an interesting setup where all his parameters and buttons are to the left, and his assets/searches are on the right. He’s also rocking his own Motion script for his everyday workflow. I feel like every time I watch any of his tutorials, his layout changes anyways! 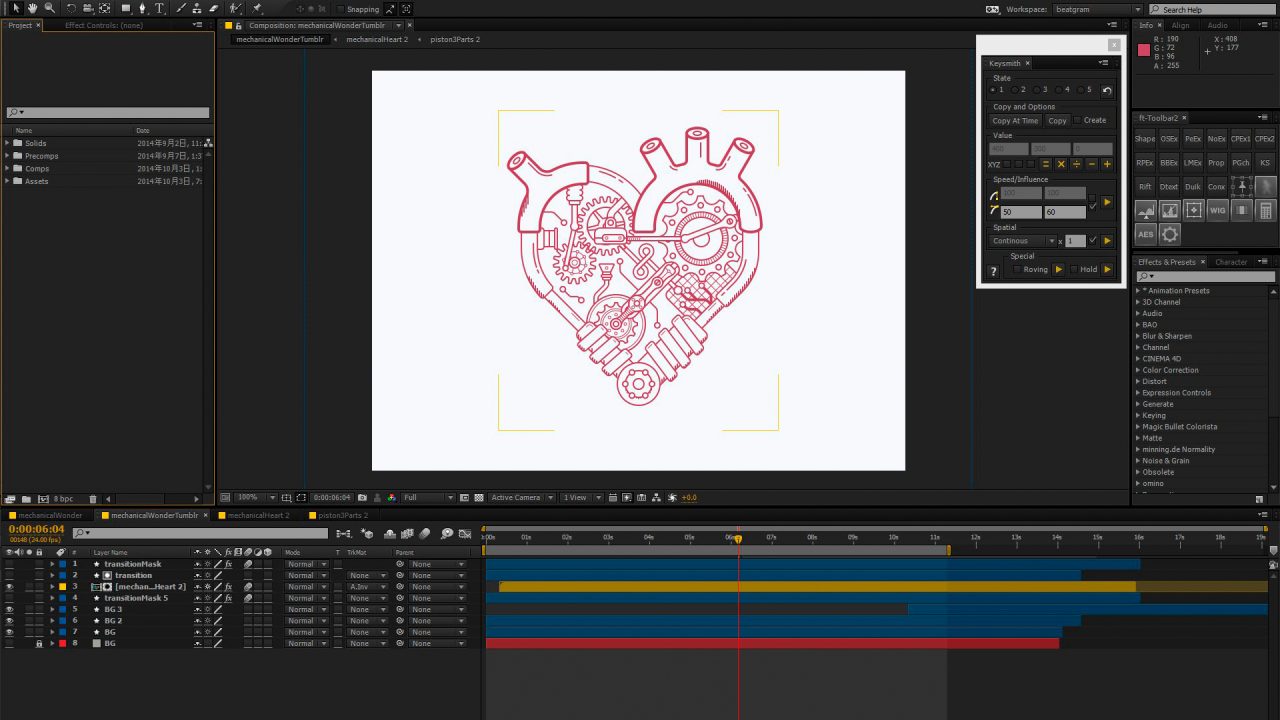 Shinsuke Matsumoto‘s workspace is fairly basic, rocking the same Keysmith & ft-Toolbar scripts for his workflow. By the way, he’s an awesome guy to follow on Twitter for timesaving and useful tricks/techniques for AE/C4D. 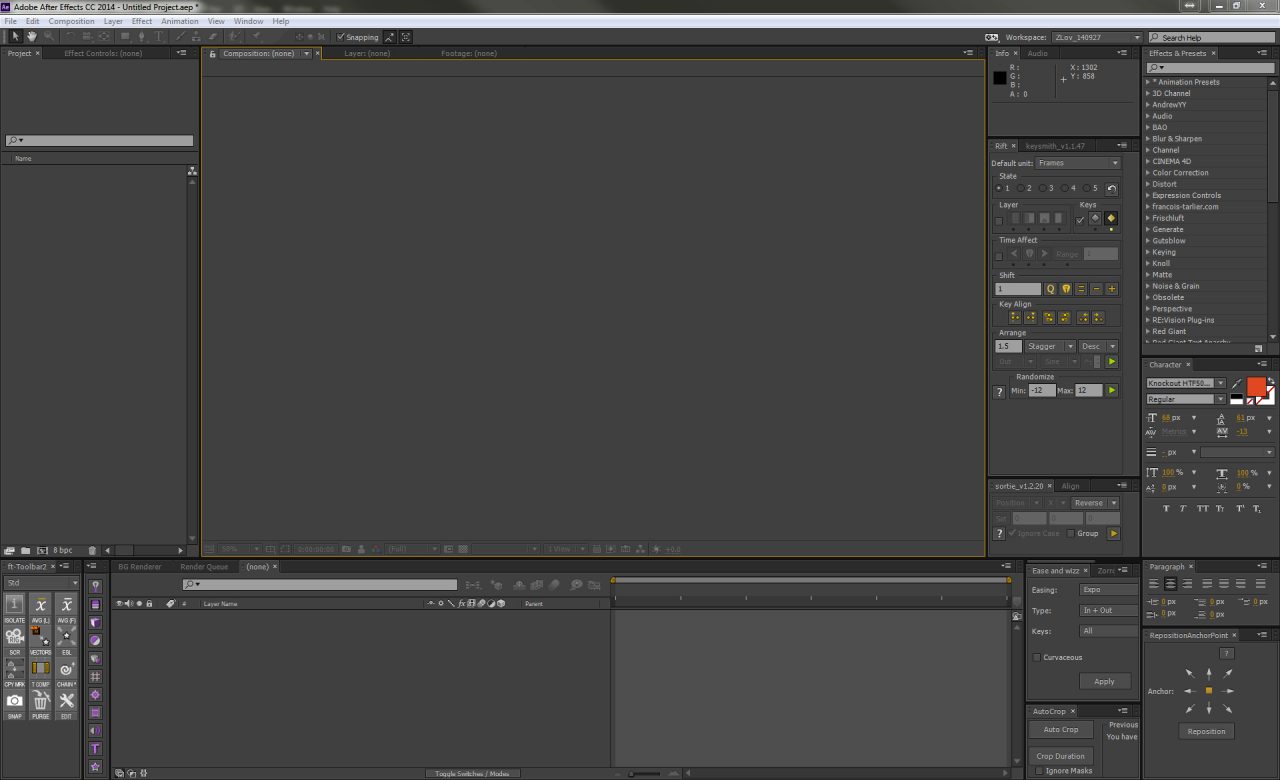 Zack Lovatt‘s workspace relies on ft-Toolbar and a few other popular scripts, all synced on Dropbox to share amongst his workstations. He uses BG Renderer for managing renders, Rift & Keysmith to manage and manipulate layers and keyframe values, Sortie to organize layers, and Ease & Wizz for fancy easing. He also uses the popular RepositionAnchorPoint, AutoCrop to crop precomps to its contents, Zorro the Layer Tagger, and Victoria Nece‘s Layer Selector Toolbar for rapid selections.

Here’s a break down of his ft-Toolbar: 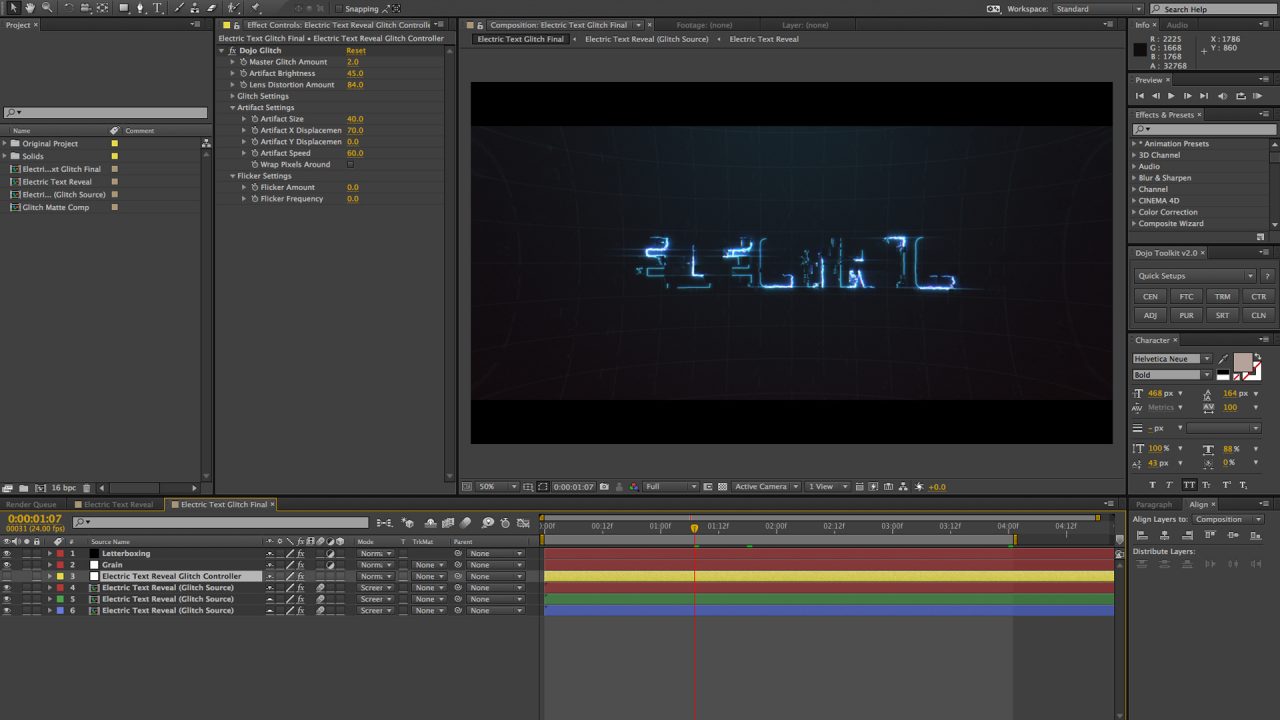 Above is my workspace with a fairly simple layout and minimum custom panels. I used to use ft-Toolbar like everyone else, but decided to develop my own “toolbar” specifically for my work, so everything I need is in my Dojo Toolkit script for the most part. My Effects Controls panel is next to my Project panel because it just makes sense to have them in conjunction with each other.

I think taking a look at other designers’ workspaces can be a very inspirational and useful thing. We’re curious to see some of your workspaces, so if you’d like to share yours, feel free to post them in the comments below! What sort of cool voodoo stuff do you have in your workspace?

30 thoughts on “After Effects Workspaces: Share Your Layout & Tools”