AEJuice’s Pack Manager 3 is a really neat asset library and manager for After Effects. It’s a free plugin, and comes with a default “Starter Pack” library, with the ability to import and manage your own assets inside After Effects. To clarify, I did work with AEJuice to produce this review, so it is sponsored, but all views expressed below are my own as always.

We’re also giving away 5 free copies of the Liquid Elements Pack to 5 random people who comment on the YouTube video what they like best about AEJuice Pack Manager 3!

This comes with over 100+ presets, assets, and transitions for you to use in your projects, with a manager to organize your own assets. If you’re looking for more expansion packs, they have an awesome library: Liquid Elements, Liquid Transitions, Monster Transitions, Shape Elements, Shape Elements 2, and the Motion Designer Bundle.

Organize Your Library of Assets

The whole idea is since you’re a motion designer, you’re constantly designing small little elements, pops, accents, and you most likely reuse them all the time, whether in the same project or not. Rather than saving effect stacks as presets, or importing projects and sorting through the clutter, the AEJuice Pack Manager can organize everything for you with live previews, and drag/drop support. It’s a single click to save a composition for reuse, and a quick drag/drop to place that asset in any of your future projects. With live previews, you’ll never have to guess which asset you’re looking at again. 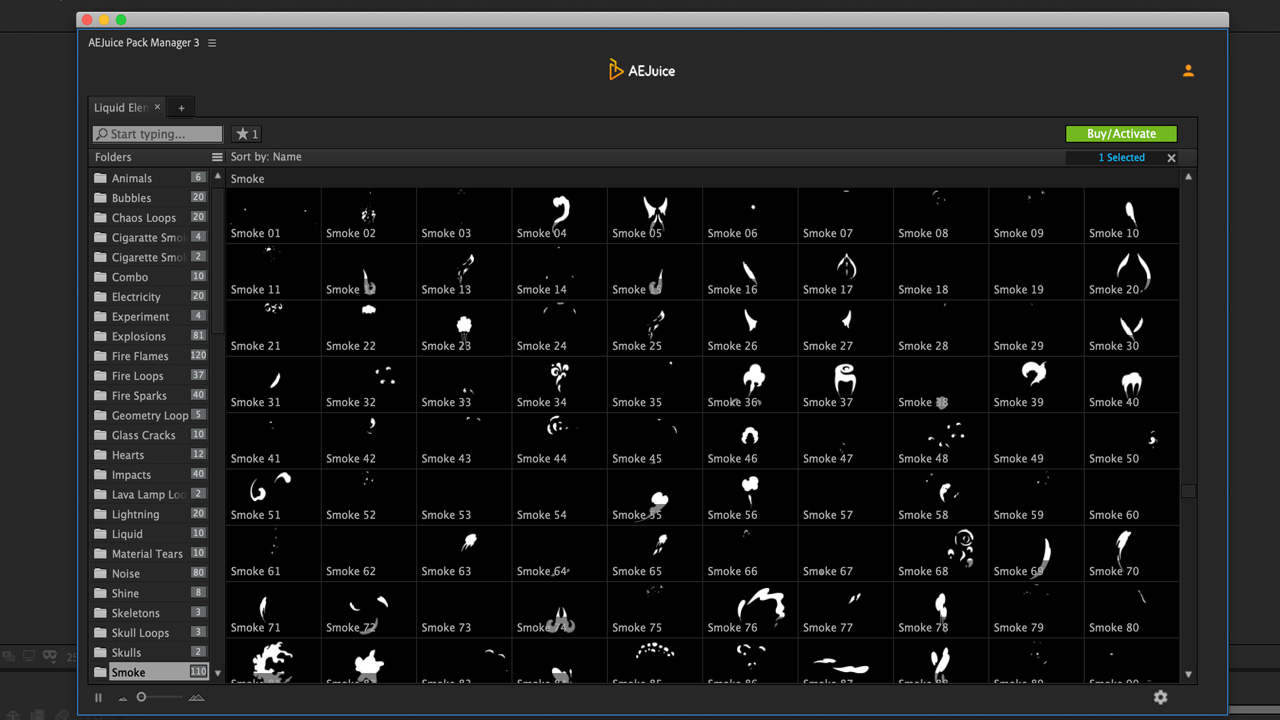 AEJuice’s library of assets is huge, crafted directly inside After Effects and fully customizable. The Liquid Elements pack is massive, and comes with all sorts of cell-style classic animation presets for use in all sorts of motion graphic work. With all the styling options, in conjunction with the huge library, you’re bound to find at least a handful of these presets useful in your work. If your design work doesn’t really utilize liquid style stuff, I’d recommend checking out some of the other packs available, such as the Shapes Pack. Whether you’re a seasoned professional or a motion designer first starting out, you can never have enough accent and design elements in your library, even for quick mockups and concepts.

The biggest pro is that the Pack Manager is free, so there’s no risk in trying it out and using it in your projects. The panel is fluid, responsive, and easy to use with drag/drop support. All the expansion packs work as expected, come with so many variations, and most importantly are native elements that can be customized. For some elements, I wish the controls were on the outer parent composition so you wouldn’t need to open the element composition to edit basic stuff like color. There also doesn’t seem to be a way to add additional folders in the “My Pack” manager, which could be added in a future update. Overall though, the plugin is a solid addon for After Effects, and a handy addon for any motion designer building a ton of reusable assets. Download it, give it a try, and buy some of their expansion packs to support them if you like AEJuice Pack Manager.

One thought on “AEJuice Pack Manager 3”